The hardest part about slowing down for Holy Week reflection is finding the inertia to get started again. Yesterday was a particularly difficult day; Alphonse resisted resuming his regular routine, and well, for everyone else, it seemed like the extended holidays left us all feeling lazy.

Maundy Thursday and Good Friday were quiet days spent inside the house. There was a lot of time for sleep, reading (I finished five books in those two days!), and some cooking experiments. I also managed to get a few hours of photography done with my Sylvanians. (See updated pictures here.)

Other than family bonding, however, we wanted to let the kids experience a Holy Week tradition called “visita iglesia” (literally, visit of churches). We haven’t done that in years as it is often difficult to bring Alphonse to unfamiliar places. This year, he seemed ready, so we decided to take a chance. Besides, with many city dwellers out on visits to their provinces, we figured this was the best chance to get Alphonse out again.

We made a list of five churches; seven would have been too much for Alphonse, we thought. The plan was to divide the 14 Stations of the Cross among these five churches. Get in, pray, get out- simple. No fuss, no detours, and Alphonse would be just fine.

It was sizzling hot on Good Friday but Alphonse was game and bore with the heat bravely. The first stop was easy. We went to the Twin Hearts Parish and that time of the afternoon, there were hardly any people there. Alphonse had plenty of room to move about, guarded by big brother Alex.

The second and third stops were busts as the churches were overflowing with people. We tried to squeeze in but soon realized that doing so might provoke a tantrum, and in public too. So we drove around, hoping to spot another church we missed, and we were

lucky enough to run into a huge procession of people along Tomas Morato. We stayed with them until they turned left on E. Rodriguez Avenue (we turned right). “We joined an actual procession,” we all declared happily, not quite believing our luck that day.

The Christ the King Mission Seminary was also full but not as brimming as the other churches. Their Stations of the Cross were set outside and it was easy to maneuver Alphonse through. By that time, however, Alphonse was squealing in happiness at each stop, his man-voice breaking down in squeaks every now and then. Despite our reminders, he simply could not contain himself. Prompted, he made the sign of the cross at each station, but I think he understood that more as a signal to move on to the next station right away.  It would have been almost perfect had it not been for the the disappointment of seeing some people react to Alphonse either in fright or in irritation whenever he was loud. 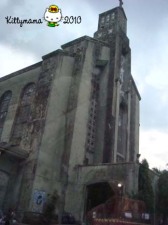 The last stop was the Our Lady of Mount Carmel Parish in New Manila. We talked to Alphonse before we went in, reminded him to stay quiet, and he did. He sat down and waited quietly for all of us. When he got bored, he blew himself some bubbles. We all loved the  provincial feel of this church, with its wonderful statues and hundreds of candles lined along one side of the wall. The church felt old, but warm and homey inside. At the end of the visit, Alphonse waved goodbye to the statues inside the church and hopped along happily back to the car.

It’s not often we get to build family memories like this. Alex hardly remembers the last time we went on visita iglesia; he was only eight then. All he remembers is the ice cream treat he got at the end. Much like Alphonse’s halo-halo, which we got for him at the end of the visits.

“Do you want to do this again?” we asked Alphonse.

Looks like it’s a date, son. Same time, next year then. 🙂