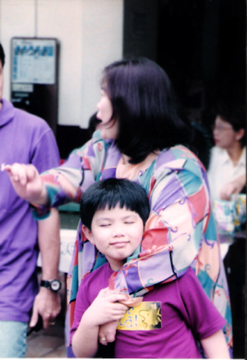 When holding on was all it took to feel loved

One Saturday afternoon when Alex was eight, I heard a loud scream coming from the kitchen. I was still upstairs in the second floor and startled by the cries, I ran down as fast as my feet could carry me. I had Alphonse tucked in one arm, flailing helplessly. When I got there, I saw Alex cradling his right arm and crying in pain.

Later, after his wounds were dressed in the hospital emergency room and his crying had subsided into soft sobs, Alex told us- his dad, the doctor, and me- how it happened. It was almost lunch time, he said, and he was already hungry. He could’ve asked me for help but he knew Alphonse was having a bad day. He could do it himself, he thought. So, he grabbed a stool, stood on it to reach the kitchen countertops, and with his right hand, lifted the cover of the rice cooker. The steam from inside the cooker gave him second degree burns. Within minutes, his arm had puffed up in large blisters.

At that moment, as I responded to his aid, I realized how hard Alex had always tried to be independent of me. At five, he learned to bathe all by himself. He learned because Alphonse kept running away from the bathroom for their joint baths and he was usually left alone to finish the job by himself. (I had no help most of the time, and joint baths solved the problem of bathing the boys without leaving Alphonse unattended). At an age when most young children still relied on their mommies or nannies to wash them after going to the toilet, he was doing it by himself, unassisted. I didn’t teach him many of the skills he picked up then- folding sheets, packing away pillows, eating alone- because he always just tried very hard not to be in Alphonse’s or my way.

Before there was Alphonse

I knew Alex needed me then but Alphonse always seemed to need me more. And so in one fashion or another, I passed off his needs for a later time, for when Alphonse was in a better mood, or sleeping, or preoccupied. Too often, by the time those moments actually came, Alex didn’t need me anymore.

I write this because I am thinking of Alex right now and trying to analyze where and when I could have done better to see to his needs. He’s been having some rough days of late, to be honest. I sense his real need to be severed from my apron strings, but I also sense that he still needs me, or at the very least, wants to need me. Sometimes, though, no matter how hard I try to reach him, he’s not ready to be connected to me again.

I can’t write of Alex the way I do about Alphonse, where I don’t spare any details and give everyone sideline seats to our lives. He has always been very private and expects me to respect this privacy. But I think I need this to be spoken out loud; I need to acknowledge the difficulties the special circumstances in our lives have brought us, and consequently, him. I pray that when he is ready, he realizes that I have stopped putting him off for later, that there is time for him NOW, however late it may be. And I hope he knows that I am just waiting, without judgment or prejudice, and always with love.

8 thoughts on “Sons and Connections”